When you think about the natural colors that are added to your foods and beverages, your mind probably jumps straight to vibrant reds, oranges, yellows, etc. that show off your favorite flavors. However, there is another color that is added to a wide range of products and used for a variety of different effects – white. And titanium dioxide is the most effective, most affordable, and most-used white color.

Whether you’re looking to brighten the white of a toothpaste product, formulating a dairy-free sauce that still needs to look creamy, or making panned candies that need a white base to show off the vibrantly colored sugar coatings – the uses of titanium dioxide are vast. But with recent changes to the usage recommendations, many companies, specifically in the EU, need alternatives to titanium dioxide for their formulations.

What is Titanium Dioxide?

Titanium dioxide (E171) is a naturally occurring mineral that is bright white in appearance. Its chemical structure makes it ideal for refracting light and its particle size allows it to disperse evenly throughout a formulation, which is why it is ideal for whitening or creating opacity in food and beverage applications.

Following a request by the European commission in March of 2020, the European Food Safety Authority (EFSA) announced it would no longer consider titanium dioxide safe as a food additive.

This decision was based on the review of all available scientific studies and data relating to the concern of genotoxicity of the potential for accumulation of nanoparticles in the body over time. While many of the studies were inconclusive, they could not rule out concern for genotoxicity. And while this did not result in a ban of the ingredient, EFSA’s decision will be used by the European Commission and its Member States to inform any possible regulatory actions.

Calcium carbonate is a bright white, naturally occurring micro-crystalline mineral. However, its particle size is much larger than titanium dioxide and its chemical structure makes it less effective at reflecting light.

So, while it is not as effective as titanium dioxide as a whitening agent, it is an effective option for applications like white coatings on confections and as an opacity agent in sauces and soups. You can see in the image below that calcium carbonate provides a similar white coating on the outside of chocolate bits compared to titanium dioxide. However, it is not ideal for use below a pH of around 3.0.

Calcium carbonate is permitted as a food color in the EU, US, Australia, and New Zealand.

Starch-based options, either rice or corn based, are commonly used to replace titanium dioxide as an opacity agent in some types of applications. Our Cloud option is a starch-based alternative that adds opacity to applications like soups and sauces for a ‘creamy’ look or to create opaque confections like the one seen on the right in the below image.

While calcium carbonate can also be an alternative to titanium dioxide in these applications, it tends to yellow during the retort process.

While none of these options is an exact match for titanium dioxide, in most cases, it is possible to replace it with an alternative to achieve a similar effect.

Looking for guidance on how to replace titanium dioxide in your formulation? Contact us for a color consult. 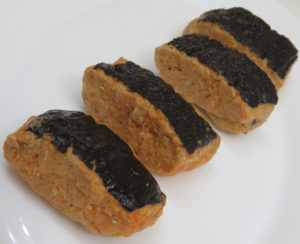 With the rise of meat alternatives, it was predicted that the next big trend in the plant-based movement would be a rise of the waters: seafood alternative products. And while the craving for meat imitation products remains strong among flexitarian consumers, 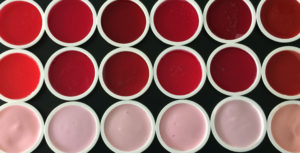 Cochineal and carmine are natural colors extracted from the cactus-dwelling cochineal insect that is native to Latin America. Depending on the method of extraction, they can range in hue from orange to red to purple. They have excellent heat, light, and pH 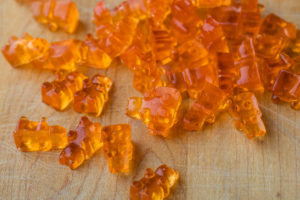